TECNO, the globally distinguished smartphone brand, is here again with its latest models from the CAMON series, CAMON 16 and CAMON 16 SE. Both the phones will be flagship models for 2020 with a new vision and better technology, especially for all the photography enthusiasts. Customers are keenly looking forward what this new model from
Read More

Our nation’s proud celebrities that we adore never fail to impress us. They are always entertaining their fans with their amazing acting skills, but that’s not it! Did you know that some of them also own brands? Yes they do! Mawra & Urwa Hocane: The sister duo owns a brand called “UXM” which is online
Read More

TECNO, the fastest growing smartphone brand has launched its most awaited Hero Phone Spark 6 – a mid-range phone with 6 upgraded features at the BOL game show- hosted by Danish Taimoor. The premier of TECNO sponsored action movie ‘Real Hero’ was also revealed for the first time. The impressive transmission was also witnessed by millions at 7:00 PM on
Read More

With the release of the TECNO sponsored poster of an action short film “Real Hero“, this globally acclaimed smartphone brand has once again become the talk of the town. The wait is finally over as TECNO has lifted the curtains from the celebrity in a hero avatar, which is none other than the pride of Pakistan,
Read More

TECNO, a renowned Chinese smartphone brand, has finally introduced its Independence Day Campaign to enhance the festivities of this day of freedom. The duration of this campaign will start from 27th of July and would go on till 14th of August. The brand has added-on prizes such as Suziki car, Motor bikes, TV, Fans, Power banks and much more!
Read More 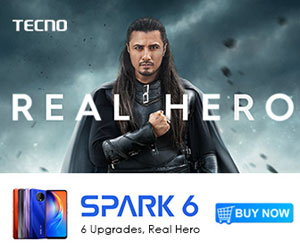